Despite the excessive heat and humidity yesterday, I included some speed work in my daily run. On this occasion I ran 200 metres in 37 secs, then 1 km in 3:39. The latter was as flat out as I could go, given the both the conditions and the extra kilograms I’m carrying. I was pretty happy with it, though it pales somewhat when compared to the 3 km I ran in 2015 in 10:08, which equates to three consecutive kilometres averaging 3:23 for each. Then again, I was much fitter then, and the conditions were ideal. (My all time best 3 km is 9:23, but that was back in 1990).

I’m going to mention the major documentary on runners over 50 again, planned for production later this year. You can hear more about it on this link https://vimeo.com/191553763, and participate in the crowd funding via https://www.indiegogo.com/projects/the-human-race-documentary#/. Have a look.

The following photo is from the Glamis Dunes in the Southern California Desert, not far from the Mexican border. Just off in the background I met an Australian geologist and his colleague conducting scientific experiments in the sand dunes. He ran a couple of miles with me, just for fun. 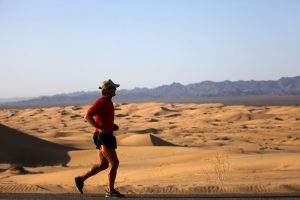 The total distance run so far is 1,894.4 km. It might sound a lot, but it’s only about 7% of the total I will be running. Still, it’s a good start. I am ahead of schedule, and I have no injuries or issues at all. I attribute this to taking it easy. My pace is slow, and if I feel the slightest pain, I stop, have a rest, give it a rub,  and start off again. It has paid off so far.

With a very cold westerly wind blowing, I decided to keep the day short, commuting back to Toledo for the night. It will give me an additional opportunity to experience this wonderful city.

The running was fairly uneventful, with the only drama being my cap – it kept blowing off, sometimes rolling down the road for some distance. I essentially meandered my way through the Toledo Valley, finishing up on a plateau at the town of Bargas.

I am not sure what’s wrong with the tracker. It seems to only update once per day. At the moment it places me about 7 km east of my actual position. If it doesn’t correct itself, I’m not sure what I’ll be able to do about it. At least it gives an approximate position.