Despite doing next to no running over the past five days, my right lower leg is still giving me trouble. The initial problem was an aching feeling, like a bad bruise, on the outside of my lower leg. It felt like I’d been hit on the leg with a baseball bat. And, as is so common with calf injuries, one muscle not doing its job leads to a chain reaction, with other muscles failing sequentially. I have no option but to keep resting it until it’s better. Very frustrating, though.

The photo below is a bit different to most I’ve posted. This was taken 30 years ago on the island of Crete by Carmel. It was the day I passed the 10,000 km mark (since I began logging my running mileage three years earlier). Later this year I’ll pass 140,000 km since 1983. I never would have guessed at that when this photo was taken. 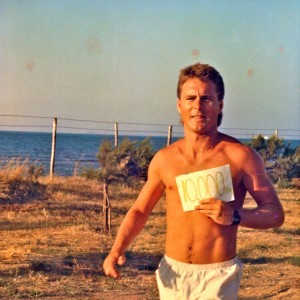 PS The tracker continues to update sporadically, usually finishing for the day around lunchtime. My real position is about 30 km further north than it is showing me.