I know I’ve been going on a lot lately about the heart rate facility on my new Garmin Forerunner 735XT. I am now pretty convinced it’s crap. As I mentioned in the last post, I did an intense session of hill sprints till my guts felt like they were hanging out. Yet, the watch only registered my maximum hear rate at 142 bpm. On a much easier run the day before the maximum was supposedly 177. Yesterday I did a pretty easy run and the max came in at 152. Today I did an incredibly easy 5 km run without exerting myself at all, yet the watch recorded a maximum heart rate of 180.

There’s no consistency at all. This finding of mine mirrors a news story I saw recently in which heart rate applications on things like Fitbits were tested and found to be very unreliable. So, if you think you’re getting value out of these things, you’re being conned like a Trump supporter. However, I do think the distance measuring facility is an improvement and most other aspects are good – just not the heart rate monitor or the elevation measurement.

I’ve totalled 115 km this week, including two speed sessions. I will admit to a fair bit of fatigue. I might go a bit easy for the next couple of days, which includes today. From mid week I’ll be running on the Mornington Peninsula for a while. That’ll be nice for a change.

Today’s photo was taken near the Californian town of Santa Maria. The fertile plains between the mountains were intensely farmed, in this case with strawberries. Half an hour later I was doing an interview with a local TV station. 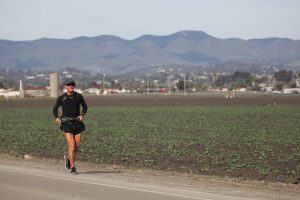 I would like, once again, to thank Bek and Steve for their hospitality in providing accommodation for the night. We’re just back from pizza and beers  with them at the local microbrewery down the road – a lovely evening. Steve has a very nice Takamine cut-out acoustic guitar, which could see some action at the conclusion of this blog. Bye.