I mentioned a little while back that a new world run will begin soon. Serge Girard from France will set out on January 31 from Paris at 10 am. He’ll initially head to the most westerly point in mainland Europe, near Lisbon in Portugal. This is the precise point where I began my European leg. Serge is finishing Europe there because he’s running around the world east to west, the opposite direction to my world run. He’ll do the other part of Europe as the final leg, from Istanbul to Paris.

I’m sure he’ll run many of the same roads as I did. This will be true of various other parts of his world run too, such as across the Nullarbor, in the opposite direction to me of course. However, some parts of his run will be very different to mine. For example, he’ll run North America from Key Largo near Miami, to Anchorage in Alaska. He’ll intersect with my path across the US somewhere along the way though.

I’ll post Serge’s web site address when the site is live. I hope to do this by January 26.

Below is a photo, not from my world run, but from the prelude to it – when I ran from Melbourne to Sydney in 2009, covering 1,000 km. This was taken by Carmel near Benalla on the day I ran from Violet Town to St James in northern Victoria. I covered 61 km that day. It was one of my favourite days of that run. 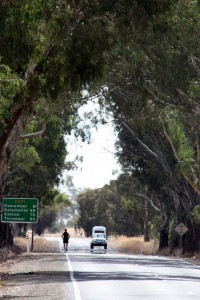 Still on track to make the inter-island ferry on Saturday. I just need to do similar distances over the next two days. Once again, the scenery was magnificent, especially the coastal section. I saw many seals basking in the sun, only metres from me. Hopefully we’ll have a video uploaded so you can see what I mean.

One of the very pleasant aspects of this run in NZ (among many), is the reduced level of roadside garbage. There is definitely less than what I’ve noticed in Australia, and in Europe too. I’ve done a lot of cycling in the countrysides of both these places, and the amount of rubbish thrown out of cars is disgraceful. Here in NZ there is still some, but far less. It may be partially related to the lower population density, but I suspect there is a greater sense of pride and environmental responsibility. Good on you Kiwis.

And in regard to last night’s dsiguised trivia question about the dead ferret/skunk in the middle of the road, the winner is the Oracle of Shanghai, who correctly identified not just the animal, but the singer as well – Loudon Wainwright III. Well done, Vanessa.