There are just two days left now until Serge Girard begins his run around the world from Paris. You can follow his progress on Serge Girard’s Website. I certainly will be.

I’m getting closer to committing to running the Canberra 50 km Ultra Marathon on April 10. It will be a nice alternative to my original plans to run a track season of 400 metre races. I might try that again next summer, although I’m not confident I’ll ever again be able to sustain the sort of training necessary to run a sub one minute 400 metres.

I know readers have seen similar photos to the one below, although this particular photo has never been seen before. It was taken about half a kilometre further on from where the Forrest Gump photos were taken. I couldn’t resist turning back and taking one more photo of this magnificent sight. 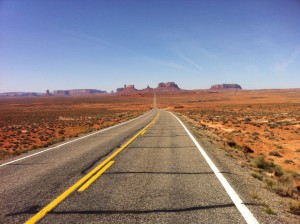 Most of today’s run was along the cycle course of the New Zealand Ironman Triathlon. The first 45 km of so was from Taupo to Reporoa, which is where the turnaround is in the triathlon. Of course, the cyclists then head back into town and then do the loop again to total 180 km of cycling. I simply went on beyond Reporoa to finish my day at 52.5 km.