I’ve managed a good week of running, but I’m definitely not at 100% fitness. I have an annoying soreness in my lower right leg, just below where the muscle meets the top of my fibula bone. It’s nothing serious and doesn’t stop me from running, but it does prevent me from running entirely freely. It went away completely for four days this week, then reappeared inexplicably. I’ll have to monitor it carefully to ensure it doesn’t get any worse.

The 2016 World Marathon challenge has just finished in Sydney. The competitors ran seven marathons in seven days on the seven continents of the world. Seven marathons in seven days is not the hard part – it’s the getting from one continent to the next in the handful of hours left in the day and then doing it all over again – that’s the hard part. I’m hoping to catch up with race director, Richard Donovan, before he heads back home to Ireland.

Today’s photo was taken in the Californian desert near the Glamis Dunes. In fact, it was taken just a few miles from where the cover photo of my book was taken. This was some sort of carnival set up in the middle of nowhere. Why? I have no idea! 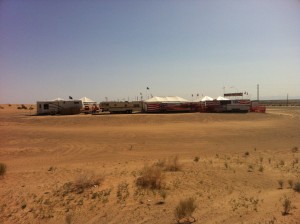 I started running today near the famous Waiotapu Thermal Wonderland, and will hopefully have a video related to this area downloaded later. There is steam coming out of the ground in thousands of locations, with occasional boiling mud.

I had a bit of a sore tendon behind my right knee today, so I experimented a bit and found that it only hurt when I was running slowly, but not when I picked up the pace a bit (or walked). A bit of a no-brainer, really. I simply increased my pace – not that it was fast; just faster than I have been running – and I had a good run as a result.