Just a couple of easy days since Sunday’s 20 km. I’ve driven more than 1000 km in two days in pouring rain, so running has taken a back seat. Back into it as of tomorrow.

I can now make the first of the exciting announcements for the year – a new world run is about to start. Serge Girard from France will begin running around the Earth on January 31 from Paris.

Serge has a strong background in journey running, having crossed the US on foot on a number of occasions. He recently attempted a combination of running and rowing around the world, but the waters between Madagascar and the mainland of Africa proved too treacherous and he was forced to abandon the attempt. This time there is no rowing. The expectation is that Serge will set a new world record for the Fastest Circumnavigation of the Earth on Foot.

Serge and I (as a member of the World Runners Association) have been corresponding for a few months about his proposed course. It meets the requirements of the WRA for a legitimate world run, so there will be a lot of interest as to how he is tracking against the world record of 621 days. His web site will be operating from Jan 20. I’ll post this at the appropriate time so readers can follow Serge’s adventure.

Below is an example of some of the sights Serge can expect to see while running around the world. This was taken as I ran along the Big Sur stretch of coast in California – one of my favourites places to run. 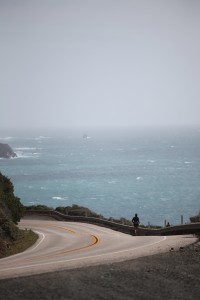