I’m still maintaining an average of almost 20 km per day this year, but it’s starting to take its toll. I’m feeling a bit ‘body tired’. I was going to do some speed work yesterday, but decided against it in favour of today. However, I reckon that would have been a mistake too, so I opted for some leaping and bounding drills instead. One thing I’ve learned over the years is that pushing through fatigue with speed work is a recipe for the rapid onset of an injury. I’ll have an easy day on Sunday, the last day of my running week.

I’ve dropped a couple of kilograms this past week. I’ve found over the years that continuing to run through a period of ‘heaviness’ can be beneficial down the track. Your body develops extra strength coping with running with additional weight – almost like resistance training – and when those kilos come off, the running feels so much easier and you’re stronger to boot. I always seem to put on weight leading into Christmas, but it comes off easily once the silly season ends around February.

This photo was taken near Lompoc in California, just down the road from the Vandenberg Air Force Base, where a runway for the space shuttle exists. I’m not sure any space shuttles ever landed there though. The region was one of my favourites of the whole world run. A few days after this I reached the coast again at Santa Barbara. 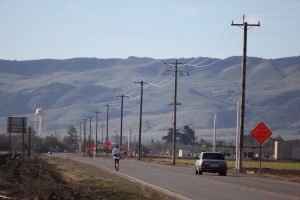