Having “carried” my left leg for the past month, the normal sort of reaction is now beginning to manifest itself. Favouring one leg is always a tricky balancing act. It’s very easy to injure other parts of the body (the opposite leg, the pelvis, even the spine) if you persevere with running with an unbalanced body.

Being as aware as I was, I managed to avoid a collateral injury during the time my left calf was injured, but now the flip side starts to manifest itself – getting the muscles that have been taking it easy to start carrying their fair share of the load again. The left calf muscles clearly suffered a small degree of atrophy, becoming weaker over the past month – it doesn’t take much time at all for this to occur.

Now as I try to get back to a full running load, I’m noticing the left leg is weak and I’m still favouring it to some extent. This results in an extension of the problem described above – an unbalanced running style and the potential for injury to other areas.

For this reason, I’m easing my way back to my normal level of running. After a couple of big days early in the week, I have limited myself to around 10 km or so per day, and gentle at that. There’s no rush, and I’d rather do less by choice than to have less forced upon me by injury.

That brings me to the issue of “what’s next?” – I don’t have any near term goals on the radar, which makes it harder to focus. I was really keen to run some 400 metre races on the track, but the calf injury, coupled with the thigh strain I suffered in October from over-sprinting, has caused me to doubt very much whether I can attain the necessary speed by race time (which is late March or thereabouts). I’ll probably experiment at least once with this possibility, but if I suffer even a minor strain I’ll probably abort that aim for this year.

The photo below was taken by Carmel during my run along the rim of the Grand Canyon almost four years ago. The ledge on which I’m standing overhung a sheer drop of about 1000 metres. I was a little nervous getting out there, but it was a very still day. All the same, I very slowly edged myself out to the very rim itself, to a place where the view was truly panoramic. 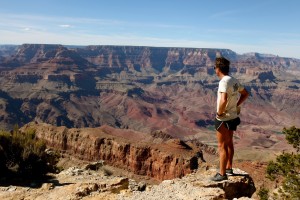