I’ve spent a bit of time over the past few days designing and measuring the course in Centennial Park over which I intend to do the 12 hour run in about six weeks. I’ve come up with a 4 km loop, although it’s not your normal loop. It’s based around a central intersection with five out and back segments per loop. It’s very flat, with a total elevation differential of 4 metres.

The out and back nature has also enabled me to set a precise course distance of 4 km. That makes it easy for me to calculate how far I’ve run during the day. There is also toilet block just metres off the course, and I pass it twice each lap – and a drinking fountain (bubbler) that I also pass twice each lap. The traffic on Fridays is very light, making it a perfect course. I’m looking forward to it. My aim is simply to run further than I ever have before in a single day, so I need to chalk up at least 108 km.

Today’s photo sees me examining a crop of soy beans en route in Illinois, with corn across the road. No, I wasn’t bent over trying to catch my breath. A few weeks later many of these crops had wilted and died in the extreme heat of that summer. 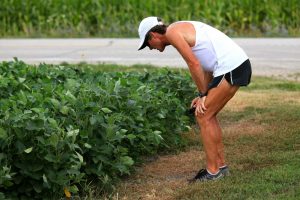 I’ve often said the mental side of this run is the harder part, but some days are just as hard physically. I am now carrying a thermometer, which I keep in the shade in my belt pouch, allowing me to know the real temperature where I’m running. Today it reached 98 F (37 C) and stayed there most of the afternoon. And I’m running in the direct sunshine, so you can see what I mean about the physical side being demanding. And the heat makes the roadkill smell even worse.