I’m starting to get my old energy levels back now, more than a week after finishing the Big Red Run. I rode over a few mountains on Saturday, totalling more than 4000 feet of ascent, with much of it at around a 10% gradient. That took it out of me a bit and I could feel some residual fatigue from the BRR. It should be fine in two weeks, though, when I start cycling over the Alps in Europe. I certainly hope I’m OK by then, or I’ll be in a bit of trouble.

As for running, my only real issue continues to be the foot that I injured on the first day of the BRR. I’m not sure if it’s just a deep bruise, or perhaps there’s a small crack in one of the bones? I normally much prefer hard surfaces like the road, but for the first time ever, running on grass feels much better – or less painful at least. And it’s causing my Achilles to do abnormal work, resulting in soreness there too. The good thing is, I’ll soon be concentrating on cycling for a month, which should give both issues in my right foot time to heal.

Today’s photo from my world run was taken on the coast road from Ventura to Malibu in California. The shoulder was extremely wide, and the traffic was very light – lighter than it appears in this photo. It was quite an easy day of running (I finished the day at Malibu). The terrain doesn’t vary too much, so it was a touch boring. 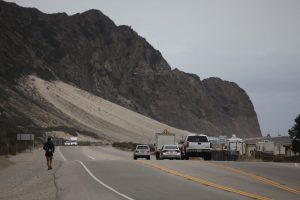 It’s amazing how a week of super hot weather can acclimatize you to running in normal heat. The past few days have been in the low to mid 30s Celsius, and I’ve felt perfectly comfortable all day.