The past few days I’ve enjoyed running in the countryside, in the towns of Orange, Gundagai, and Binalong. All are at a moderate elevation (between roughly 500 metres and 900 metres), so I’m hoping again to have picked up some minor benefits from running at altitude. The best part was the variety. It’s always a pleasure to run somewhere different.

I will run another lap of Centennial Park early this coming week. It will be my final time trial before the Sutherland to Surf, my lead up race to the City to Surf. I have now received my race bib for the City to Surf – number 282 in an expected field of 80,000 or more.

The world run photo for today is from the morning (I think it was about April 1, 2012) when I crossed from Utah into Colorado. I recall it being very windy and cold, ahead of a snow storm that night and through the next couple of days. 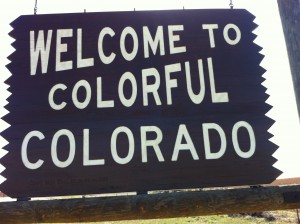 A journalist and photographer from the local Herald Times Reporter newspaper came out this morning and met me on the road to do an interview and take some photos. You’ll see some of this in Carmel’s photos from today.