I had a weird experience the night before last. I went to bed with my right Achilles feeling as it had all day – a little sore when walking or running, but otherwise painless. But I awoke during the night with it aching really badly. It was enough to stop me from sleeping for an hour more. When I got up in the morning I could hardly walk. Luckily, running wasn’t too bad, as long as I ran really slowly. However, I was hobbling just to walk.

Then, this morning I got up and it was virtually back to normal. I still took it easy today while running, but it wasn’t much of a problem at all. I have no idea what happened. Injuries these days are much harder to work out. It used to be easy to evaluate why I had soreness and pain. Now it tends to be a mystery.

I’m a bit sick of writing about injuries, so I’ve decided to take up where I left off in describing the Big Red Run. I managed to post about the first two days of racing (if you want to read these, go back to the posts of June 24/25), before a lack of internet reception precluded me reporting on the remaining days. So, for the next few posts, I’ll write about those missing days. Firstly, Day 3.

Like the first two days of marathons (a 4:59 over very difficult terrain, followed by a bit easier 4:29, both resulting in a 4th place finish), the third day was also a marathon distance – 42.2 km – and also run over really difficult terrain. However, I nearly didn’t make it to the starting line. The night after the second marathon I woke during the night feeling really ill. A strong sense of nausea, a bad headache (I rarely ever have headaches – probably less than ten in my whole life), a feeling like a knife was stabbing into my chest, and aches in all my joints. I didn’t see any chance of me running in the morning. I was even making contingency plans for how I could get home.

However, by the time I awoke I was feeling slightly better, so I decided to give it a go. I started slowly and took it easy. I think I was in about 20th place after a few kilometres. But by 15 km I had made my way through the field and up to 4th place again. Then the real battles began.

I had just passed Sarah Foster (the eventual womens’ winner) and Ian Westaway to reach this position. Very soon after, both of them passed me again and went ahead. I then got to Sarah a few kilometres later and went ahead of her once more. But Ian was way ahead. On a flat stretch of dirt track, Sarah caught me again. By this stage we were about 5 km from the finish.

The terrain again became really tough, and Sarah and I caught Ian, gradually pulling ahead. Then we had to run along the top of a sand dune again. I guess this must have favoured me, as I slowly inched in front of Sarah, maintaining my 4th place to the finish line. The three of us finished within minutes of each other, pretty well exhausted, but really pleased to have had such a monumental battle. There were hugs all round.

The strange thing was, though, I felt really good after having run, with no signs at all of the sickness from the night before. I assume it was a weird reaction to the highly unusual lifestyle and diet (dehydrated food) of the previous couple of days. After that third day, however, I felt quite good for the remainder of the race, though increasingly fatigued, of course.

Stay tuned for further instalments – the battles with Sarah and Ian continued in subsequent races. BTW, the three who finished in front of me over these first three marathons were the same three guys each time – Timmy, Mick, and Helmut.

To conclude, here’s another photo from my run around the world. This was taken in Santa Barbara, where we stayed with Libby’s nephew, his wife, son, and Buster the dog. I enjoyed wrestling with Buster for his toys, in this case, a set of rubber rings. It was a great way to relax after running all day. 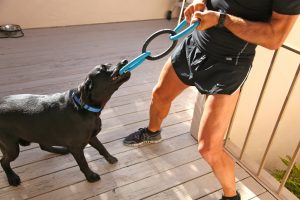 It was a very pleasant day of running, although without incident. I finished in the very pictureque and historic town of Port Washington. It’s easy to believe you’re on the ocean in this town.

Today’s question and answer is one almost always asked by journalists – “Why are you doing this?”: My standard answer if four-fold. When I first thought about running around the world, it was because I was excited by the adventure. Quite simply, I thought it would be a great way to see the world. I then decided it would also be an ideal way to raise money for charity, and Oxfam was the perfect candidate. Thirdly, since there’s nothing special about my ability to pull off something like this, I’m hoping to inspire others to experience their own adventure – a walk across the state, a cycle trip from one city to another, whatever interests you. Finally, as many pointed out, I may as well look at setting a record. Now, that’s easier said than done but, as it turned out, there was no existing record for the Fastest Circumnavigation of the World on Foot, so I thought I’d have a go. I want to point out, however, that, if I am successful, I will not be the first to run around the world, simply the fastest. Jesper Olsen has already successfully run around the world (twice), and Tony Mangan is currently involved in a very comprehensive world run that includes North and South America, top to bottom.