So, on to Day 4 of the Big Red Run. After three consecutive days of marathons, the fourth day offered a little respite – it was only 31 km. However, the organisers compensated for this by choosing the toughest terrain of any of the stages.

We started with 3 km along the ridge of the highest sand dune in the Simpson Desert – the famous Big Red. It’s almost 100 feet high and the sand is very uneven and soft at the top. What a struggle it was to run 3 km in those conditions. I was determined not to go too hard early and, consequently, I was back in 10th place early on. The three usual suspects, plus Sarah and Ian, were well ahead of me, along with several others.

However, at about the 5 km mark, I came upon Timmy. Currently holding down 1st place overall, he’d strained a thigh muscle the day before. Now he was stopped. After checking he was OK, I pushed on, letting Tim know I’d inform the next course official, in case he couldn’t go on. By 13 km I’d caught Sarah and Ian.

At about the 15 km mark, after some really tough and uneven countryside, we came upon a dry salt lake that looked spectacular. I stopped to take a photo, then proceeded to enjoy a flat and even run for the next mile or so. Not so!!!! The lake proved to be the hardest part of the entire six day race. The salt crust was thin and every step saw me break through and sink ankle deep in thick clay-like mud. The suction made it very hard to lift your feet out of the mud on every step. In fact, the suction caused me to lose my shoe on several occasions and I’d have to turn around, dig my shoe out of the mud, and put it back on.

I was slightly ahead of Sarah across the lake, but she caught me again just after we made it to the other side. Reaching solid ground, I started to feel more energetic, ever so slowly pulling ahead of Sarah. The final 10 km was just as difficult, with sand and thorns and animal holes and hidden rocks – and I had Sarah just behind me the whole way. We completed the stage with a final scaling of Big Red before running downhill to the finish line.

Once again, Sarah finished just a minute or so behind me, and we congratulated each other with a big hug. We finished in 3rd and 4th place respectively for the stage. Ian and my tent partner, David Barnard from South Africa, finished not long afterwards. Timmy did manage to finish, but he had now dropped down to 3rd overall. I was still in 4th place.

We were all very tired, but pleased to have all afternoon and night to recover before the following day’s big one – a double marathon of 84 km. But that’s for the next instalment.

Today’s photo from the world run is a special one – it’s from the start, just moments before I began my odyssey. Carmel, Hannah, and Grace are with me. Within minutes of this photo, I had begun to run around the world. You can see the Sydney Opera House in the background. 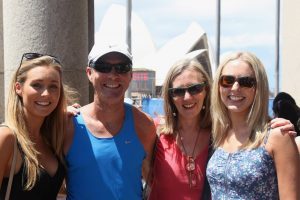