In some respects it’s not a good time of the year to be doing a race like the Sutherland to Surf – or anything that requires you to be well rested in order to perform at your best. I keep telling myself to go to bed early, but the Tour de France keeps sucking me in. I was up again last night till nearly 1:30 am. The Ashes cricket didn’t help either.

It’s not an ideal preparation for a race. One late night is not a problem, but a couple of weeks with nights of just five hours of sleep is not conducive to racing. But I keep telling myself this is just a lead up race. The important thing is that I get some decent rest ahead of the City to Surf on August 9. That shouldn’t be a problem, unless I get waylaid by the later Ashes Tests. I’ll have to try extra hard to resist during that first week of August.

Anyhow, as stated before, my prediction is a time somewhere in the 42 minute range (unless my lack of sleep has a negative effect). Last year I finished in 44:05, which was good enough for 2nd in my age group. Not that my position means anything – the point of doing the race is two-fold: a race that doubles as both a hard training session and a indicator of what I might expect to run in the City to Surf.

On the topic of an indicator, here are some examples from the past when I ran both races in the same year. The first time is the S2S and the second is the C2S.

Them’s the figures. At this point, it doesn’t give me a huge level of confidence in my ability to run in the 54 minute range this year for the C2S. But let’s see what comes of Sunday’s race. Tune in on Sunday afternoon to hear how I did.

The photo for today was taken on the prairies in South Dakota in late May 2012. I’ve known a few people over the years who I suspect hailed from this town. 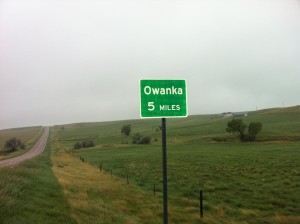