So, to the final race day of the Big Red Run – Day 5. As mentioned previously, it was a double marathon of 84 km. Any time you run 84 km, it’s a big deal. But doing it as a part of a race makes it a bigger deal again.

But, then factor in the terrain. Although the long day was a bit easier than some of the earlier days, it still entailed a couple of kilometres along the ridge of a sand dune, lots of other sand running, and a couple of stints over incredibly difficult gibber plain – the worse gibber of the entire race.

BUT, then also factor in that we’d already raced for 158 km over the previous four days and over the same difficult terrain. When you combine all those components you can begin to appreciate just what a monumental effort it was for the participants to complete this race.

We started at 6 am in the dark. Everyone had to have lights, front and back, and wear safety vests. Except for Mick and Helmut, who went out hard, the next group of fifteen or so people ran the first 5 km in around 32 minutes. I was part of that group, as was Timmy, who was taking it easy with his thigh strain.

From that point the field started to stretch out a bit. I ran from 5 km to 20 km with Steve Lucas, who I’d also ran for a similar distance with early on Day 2. Steve and I had a good chat on a number of topics. While he admits himself he’s not particularly fast, Steve can just keep going all day at pretty much the same pace. And he’s not that slow either.

Just after the second checkpoint we reached the South Australian border and turned left to run along a fence line, crossing numerous sand dunes. Ian had been ahead of me at that point, but by the time we turned north again, away from the border, I had passed him, putting myself into 3rd place on the day.

A long flat stretch followed to the third checkpoint. I had noticed someone behind who was gradually catching me. I thought it was probably Tim, assuming his leg was feeling better. When I reached that checkpoint I had two surprises. The first was that Mick was sitting in a chair, having his ankles taped. He’s pretty flat footed and suffers from pronation. His ankles were starting to pack it in. The second surprise was when the guy behind reached the checkpoint while I was talking with Mick. It wasn’t Tim – it was Mike Pilgrim, a guy who had been back toward the middle of the field in the previous stages. What an effort. All the same, given his past performances, I assumed he might fade a bit as the day wore on.

For the next 30 km, the two Michaels and I ran pretty much together, sometimes spreading out a little, but ultimately regrouping at checkpoints. Sometimes I was in 2nd place, sometimes 3rd, and sometimes 4th. the We had some good conversations, albeit tempered by the fatigue that was setting in.

At the 6th checkpoint, Mick had to stop for further attention to his ankles. He had been the race leader at the start of the stage, but it was pretty obvious that Helmut was now “the leader on the road”, to use a Tour de France term. Mike Pilgrim headed off, followed by me, and ultimately Mick. Those positions never changed again. Mike never did fade as I expected him to. He just kept powering along, and I could tell I wasn’t going to catch him. With 3 km to go and the finish line in sight (literally), Mike was way off in the distance and I couldn’t see Mick behind me. There was no reason to hammer myself. I heard the sound of a text alert come through – phone coverage finally – so I decided to walk while I made some phone calls and answered some texts and emails. By the time I’d finished those tasks, I had just a gentle 1 km to the finish line, coming in in 3rd place on the day in 10:21.

It felt fantastic to finish, especially given the state of my toes. After five days and nearly 250 km of running with my shoes full of sand, my toes had had most of the skin ‘sandpapered’ off them. My toes were treated by the medics for a while, but I insisted I get up and greet each of the other runners as they came in. This went on well into the night. Everyone who finished was hugged by most of those who’d already finished. And everyone deserved it, because it really was a monumental achievement to finish.

We enjoyed sitting around the campfire in between arrivals, having dinner, talking, and, in the case of myself and my other tent mate, Duc, we were given a Grolsch beer to enjoy. It went down very nicely. There was even a guitar on hand, so I played a number of songs around the campfire – a very impromptu singalong.

When Timmy finally made it in a couple of hours later – an amazing effort, with his injured leg as it was – it was clear that he’d unfortunately slipped out of the top three. This had allowed me, by default, to assume 3rd place overall. Mick had held on to 2nd overall, with Helmut the winner. First female (and 4th overall), Sarah, had come in about half an hour after me on the day, along with the 2nd placed female, Haley. They had finished very strongly, keeping pretty much the same pace all day. Everyone was happy.

That’s enough description of the long day. The next post will be about the final 8 km into Birdsville, followed by the celebrations.

But, before then, let’s finish with a photo from the Otago Central Rail Trail in New Zealand. This was taken on the fourth day of my world run. As you can see, it was a very peaceful and serene place to run, although there were sometimes large rocks that made the running tricky – good training for the gibber plains of the Big Red Run, which was to follow five years later. 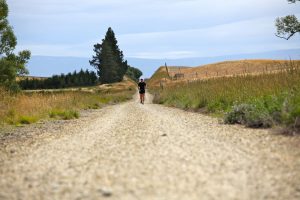 I spent yesterday productively. Besides being Carmel’s birthday (and she really enojoyed the day), I managed to acquire a new Garmin watch, so the link now includes the map and graphs again. Thanks to Jim and Bev at Running Excels Chicago for their help with this, including the free running singlet.

Today was spent making my way out of the greater Chicago region to the south. It has taken me the equivalent of over two fulls days to cross the city from north to south, such is its size. I’m now heading toward my final “appointment” in the mid west – the meeting of the Mississippi and Missouri Rivers just north of St Louis. I have quite an interest in the confluence of great rivers, ever since I visitied Manaus, where the Amazon and Rio Negro meet. I’ve already run over both the Mississippi and Missouri already – now I want to see where they meet.