Not long now till I leave for Europe to cycle. We start in Italy from Milan’s Malpensa Airport on Monday. I’ll update the blog as often as I can, which should be most days.

In the meantime, I’ve kept the running fairly brief. I still have  soreness in my right Achilles. I’m sure it will disappear as I start the cycling, because I’ll only be doing a few kilometres of running each morning, prior to the riding.

As promised, here’s the wrap up from the Big Red Run. The morning after the long day, we had an easy untimed 8 km romp into Birdsville. Most people walked it, including me, running just the final bit. We finished to the cheers of the crowd, and were immediately given an ice cold beer with which to celebrate. Lots of congratulations ensued, along with photos. My tents mates, David Barnard and Duc Do and I had photos taken together, along with many other people. BTW, David did very well on the long 84 km day, placing 5th, which put him in 5th place overall as well.

After a couple of beers, we all headed back to our rooms for a much needed shower (we hadn’t had a shower for six days, despite running 250 km in that time). Strangely enough, I didn’t smell any BO on anyone, probably because the extreme dryness precluded the growth of the bacteria that BO thrives on.

Then it was back to the pub for lunch. Carlo and Wilson attempted the Birdsville Volcano Burger. If you finish it, they put your photo on the wall. Only five people have ever managed to eat it, so hot is it. Carlo was doing really well, but pulled the pin with about a quarter of the burger to go. But Wilson managed to eat the lot, and now his photo is on the wall of the pub.

Several of us then had a nap for an hour or so, followed by reconvening at the pub for a couple of hours. Then it was down to the community centre for the race presentation and dinner. Race presentations aren’t always that interesting, but this one was great. As I’ve mentioned before, the organisers did a fantastic job, and that included right up to the presentation at the end. I was really pleased to get up on stage to receive my award for 3rd place overall. It was a great honour.

Where would we go after that, other than back to the classic Birdsville Pub. Celebrations went on till about 3 am, and some of the runners were in much worse state at the end of this night than at any stage during the run – well done particularly to Paul, for an outstanding performance. The next day the majority of us headed home, by plane or bus. It was a truly memorable experience, and I thank all the other runners, volunteers, and the organisers for those memories.

I’ve probably forgot something or someone I’d like to mention, so I may add snippets in days to come.

Finally, all runners are likely to be interested in the following study. I recommend you click on the link. I definitely found it interesting.

And, as usual, let’s conclude with a photo from the world run. This photo was taken at the house of my good mate (and Chairman of my sponsor, Asia Pacific Digital), Roger Sharp, just outside Queenstown in NZ. I’d just finished my first day of running in NZ (2nd day of the world run), and Roger and I were celebrating with a few beers (later with some good red wine). The following few days Roger and his wife Christine, along with kids, Tim and Katie, accompanied us on bikes along the Otago Central Rail Trail while I ran. 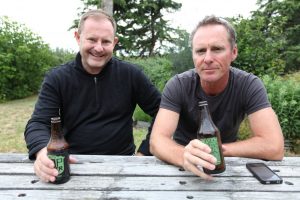