This time tomorrow I’ll be high above the Indian Ocean, on my way to Milan to begin our 4,000 km cycling tour. As was the case in 2007/09/11, Dave and Jo will be accompanying Carmel and me. But this time Jane and Peter will be on the journey too. The guys will be riding, while the girls will be off having fun each day in the car. We’ll wave goodbye each morning and see them when we arrive in the next night’s accommodation.

We’ll start riding from Milan’s Malpensa Airport on Monday, finishing a short day at the town of Biella. The following day sees us finish in the shadow of Mont Blanc, on the Italian side. On Wednesday we ride over the Alps and into France. Stay tuned for regular updates.

Another photo here from NZ during my run around the world. This was taken on my way into Dunedin. In fact, this location was pretty much the most southerly point I reached during the entire world run. And it was only the sixth day of the entire run. 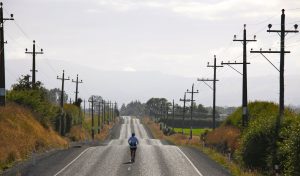