This morning I felt great on the road. Maybe five days of easy running  did the trick and freshened me up significantly after last Sunday’s race. I managed a longish run at good pace and with lots of hills. Tomorrow will be very easy, and then Monday will be an interval session of some sort, although I haven’t decided exactly what distances I’ll do.

On Wednesday I was the official speaker at an event in the city (Sydney), talking about my run around the world. The feedback was very positive, with lots of listeners wanting to have a chat afterwards. I hadn’t given any talks for a little while. Maybe I should do more.

The world run photo for today was taken in the Colorado Rockies. If I remember correctly, this was  just down the road from Fairplay, the town in which the cartoon series South Park is based. 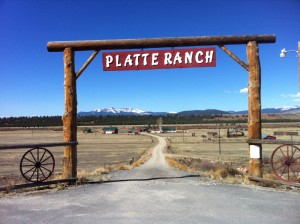