I was still feeling quite a bit of residual fatigue and soreness in my calves this morning, particularly the right one. I’d planned a speed session and I was quite wary of attempting this given the current state of my legs. I really didn’t want to risk a calf strain this late in my City to Surf campaign. I remember all to well that last year I suffered the beginnings of my Achilles injury when I overdid the speed work after the Sutherland to Surf. It was that very injury which finally gave way during the City to Surf, preventing me from finishing the race and hindering me for more than six months afterwards.

But I decided to do a little speed work anyway, keeping it simple and easing off if I felt any worrying twinges. I ended up running my 230 metre (8% gradient) hill in 38.8, which was the fastest for several years. I then did 1 km in 3:09, feeling fairly comfortable, followed by a couple of other sprints and some skipping, leaping, and bounding drills. I finished with some standing high jumps, including five 87 cm vertical jumps (I’d try to jump even higher, but I don’t have a higher platform that’s safe enough to jump up to).

The pleasing thing was that I came through the session without any problems. I felt comfortable and the times were quite good. I’ll now aim for a lap of Centennial Park on Thursday.

The world run photo below was taken just south of Fairplay in Colorado, part of South Park County. This is the real South Park, and the store was a real store. It’s not a gimmick that’s trying to cash in on the cartoon series – the store bore this name well before the popular series ever appeared on TV. I can’t imagine how the creators of the show ever chose such a remote and sparsely populated region on which to base a television series. 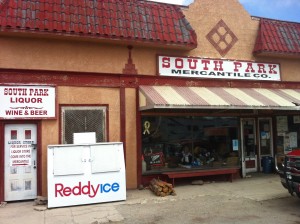