After an outrageously tough first five days of our cycling tour, the sixth day was much easier. We did ride 145 km from l’Alpe d’Huez to the ancient town of Romans sur Isere, but it was almost all downhill or flat. The total cumulative ascent for the day was 405 metres, easily the least so far. It certainly seemed easier than any of the previous days. You can see the Garmin data via the link below. There are also some photos below from today’s ride, including one of me dunking my head in a fountain.

Interestingly, this afternoon, as I rode through Romans, I crossed over the course from my run around the world. On this occasion we’re heading from east to west. During the world run it was from south to north through the town. I’ll cross my world run path at least once more on this trip.

Just going back briefly to yesterday, it took me 115 mins to run up Alpe ‘dHuez, a far cry from the 80 minutes I did back in 2009. On that occasion I had cycled over the Col du Galibier that morning, so I can’t use the excuse that yesterday I’d earlier cycled over the Col de la Croix de Fer. 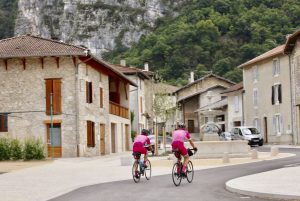 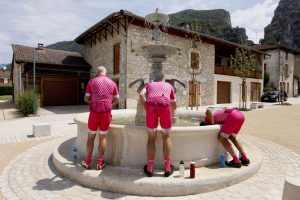