Another good run today has left me pretty happy with how I’m travelling. After yesterday’s run – a total of 28 km that included a 3 km time trial in 10:51 – I thought I’d be a bit sore and heavy in the legs. Instead, I felt fine. The 3 km yesterday was slightly faster than last year’s initial foray at that distance, and off the back of a 135 km week. I’ve got to be happy with that.

This (photo below) was a fantastic running and cycling trail between Duluth and Minneapolis in Minnesota. I was able to run on this trail for about 150 km. What a pleasure it was to have no traffic, good weather, and lovely tranquil surroundings. That’s as good as it gets on a world run. 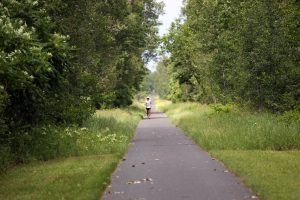 Sorry to keep harping on about the heat recently, but today warrants it. It was predicted to be the hottest day of the week, and it was. In the sun this afternoon, the thermometer read 137° F (58° C). I’m not sure what the official “in the shade” temp was, but it was well over 40° C.

I feel I have now managed a bit of a “bucket list” achievement – to have run over 50 km in temperatures reaching 58° C. I would never have considered it possible, and I hope I don’t have to do it again.

Today I passed by the roadhouse of Madura. I was surprised to come to the top of a pass, and run down and escarpment to a lower plain, on which the roadhouse sits. The afternoon was spent running alongside the escarpment, which used to be the coastline, before sea levels dropped during the last ice age. There are thousands of fossilized sea shells scattered all over the ground, as this used to be the sea floor. I had to start ignoring them, as I was getting distracted looking for interesting fossils, instead of concentrating on running.