As you can see, my web site is finally back up and running. I’m not sure what the problem was, but hopefully it won’t occur again.

I’ve spent this past week taking it easy. The Big Red Run was so extreme, it demanded a solid rest afterwards. My right foot is still sore and bruised from when I rolled my ankle on the first day of the race. This has caused me to change my gait to compensate, which has resulted in some Achilles soreness. I can’t see it becoming a major issue, but I need to be careful.

It’s been good hearing from so many of the participants in the Big Red Run. It’s almost as if we all went into a battle together – a battle against the course and the terrain itself. And we conquered it too, and now have something special in common. As for the effort required, I reckon everyone who completed that race is capable of running around the world – seriously. In fact, running around the world is easier in many ways.

I’m going to continue taking it easy as far as running is concerned, but not on the cycling front. I’ll be doing a big ride over the mountain passes in Kangaroo Valley tomorrow, training for a 3,500 km ride with Dave and Peter through Italy and France which starts later this month. We’ll be doing some of the Tour de France course as well.

Finally, here’s a photo from the world run, this time taken in central Spain. A few days later I was running over the Pyrenees. 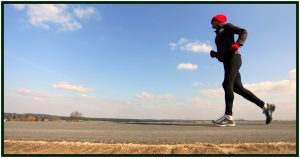