I held true to my word, running a session of 10 x 400 metres this morning, despite very strong and cold south-westerly winds. Between each 400 metre repeat I jogged a slow 100 metres as my “rest”. I was pretty happy with the session overall, averaging 77.1 seconds per 400 metres. It’s much harder when you get minimal rest before having to back up with another sprint, so the times are not as fast as when doing just a one-off. I’m sure this sort of session will pay dividends on City to Surf day.

Despite an easy run yesterday, I can feel a bit of long term fatigue in the legs. After all, I’m in a heavy training phase at the moment. Last week I ran 110 km in total, with more than half of that as quality running – speed work or hills. I’ll probably have an easier week some time in the coming month, just to freshen up a little. Running tired means my time trials don’t yield as good a result as they otherwise would, but I’ve got to keep the long term picture in focus.

The advance copies of my book have just arrived. For that reason, today’s photos is of the book cover. Now you’ll know what to look for in the book stores in June 24. 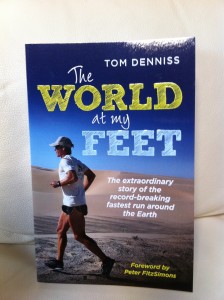 Please note, the tracker is showing me in the town of Miller. However, my official position is at the village of Ree Heights, about 14 km to the west.