Only two weeks now until my book is available. The interest among the media is building too. One national newspaper will be reviewing the book, and it’s likely one of the major national television programs will be featuring an interview too – certainly a great way to increase awareness of the book.

I was thinking of a shorter (and easier) time trial tomorrow – a mile or even just 1 km – as a way to give myself a more restful week. However, I’m feeling pretty good so I might do another 5 km time trial. Three weeks ago I managed 18:16. If I do run 5 km tomorrow morning the obvious target will be to see how close I can get to 18 minutes (my all time best is 16:34, but that was 25 years ago).

In regard to the above, here’s a little advice for young runners starting out, and even for longer term runners who may not have done so in the past – there is much to gain by logging your daily running efforts, especially the harder efforts. Over the years, I’ve found it invaluable to look back at my race times and speed sessions, as well as the overall distances I was running and how these correlated with the race times. For example, I just looked through last year’s log book and noted that I ran 5 km on June 19 in 18:46. I also ran 3 km on June 11 last year in 10:56. Doing 5 km tomorrow (June 11 also) will provide me with important information in relation to how I’m faring this year in comparison to last year – very important for setting realistic goals for upcoming race times.

Today’s photo is very similar to the last – but for a reason. It’s of a different California freeway, this time a 12-lane road near San Francisco. Once again, I took the photo as I passed over the top of the freeway. The point is, most freeways look very similar and it’s very boring running on them. That’s why I generally chose not to – although the was no option in California anyway, as freeways are barred for pedestrians and cyclists. 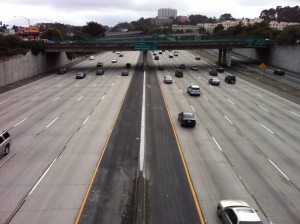