The first few weeks after my calf injury I did no uphill running. I’m now starting to get back into the hills (something I’ve concentrated on a lot over the years), and I’m noticing how much condition I’ve lost. It’s hard work. But it won’t take long to get back to my former level of fitness.

I’ve now run over 100 km so far this week, and in just five days. The weekend will be a bit lazier, however. I have a big football reunion over two nights, so I won’t be feeling like long runs each morning. But a couple of easier days won’t be so bad after a big mid week.

You may be interested in the following link, which describes the world’s best running blogs. Mine is at number 124, but that’s not a ranking – it’s simply an alphabetical listing of the blogs. http://newfitnessgadgets.com/best-running-blogs

Here’s a photo of Chook and myself during Hurricane Sandy in late October 2012. It was cold, wet, and windy, as we ran along the Boston Marathon course. There were very few cars or people around that day. 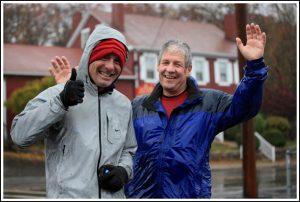