Once again, however, I could feel the fatigue in my legs more than the pain in my lungs. That’s a good sign, as a bit of rest means I could go even faster. It’s also my fastest 5 km in 18 years, although I haven’t really run many in the interim. And the final 3 km was run in 10:32. That’s faster than all but one straight out 3 km I’ve run in the past five years – and that was the 10:26 I ran last week. All in all, it augurs well for the possibility of me ‘beating my age’ in the City to Surf. It’s by no means a certainty, but it does give me some hope.

The photo from the world run today is a long view to the Golden Gate Bridge in San Francisco. I had already run by the bridge and out to the southern headland on the ocean when I took this photo, having just commenced the North American leg of the run. It seems like a long time ago now. 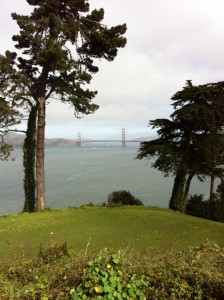 I had a very enjoyable run today, through hilly forests dotted with holiday houses, and the smell of eucalypt log fires never far away – the classic aroma of winter in the Australian bush.

It was also my earliest start for more than a year. This was despite a great evening at Warren and Judy’s, with many a fine red wine being consumed. Thanks again, guys, for your fantastic hospitality.

The day was very hilly day, as I made my way up the escarpment, east of Perth. Late in the morning, I looked back at my final view of Perth and the Indian Ocean. I will see the Southern Ocean in about a month, and then the Pacific Ocean, just days before I finish the run.

I am enjoying having meat pies back on the menu. They’ve been my lunch for the past two days. It’s been more than a year since I’ve been able to buy them on the run.

All in all, it was probably my best “second day” after a break, with almost no residual soreness from yesterday. I hope the trend continues.

PS Google Maps led me up a wrong road. I had run 170 metres before I realised there was a problem. I’ve deducted the 340 metres from the Garmin data.