After mentioning on Monday that I wasn’t up to any speed work at the moment, I’ve since felt much more capable. On Tuesday I ran a few hundred metres at a little under a 4 min/K pace, and today I belted out a couple of hundred metres at a pace of 3 min/K. While that’s a very modest start, it does show my calf is getting there. Next week I’ll get back to a normal routine, including a day of speed and an increasing long run.

This morning I ran past a house that Carmel used to live in back in 1982. It brought back memories of what I consider the greatest marathon race I’ve ever seen as a spectator, albeit on TV. It was in that same house that I watched the 1982 Brisbane Commonwealth Games Marathon, in which Rob de Castella came from way back in the field to beat Tanzanians Ikaanga and Shahanga in a classic battle of attrition. Despite being run in sub tropical heat and humidity, Deek still managed a winning time of 2:09:18. I consider it one of the greatest marathon performances ever.

Here’s a photo with a difference from the world run. This was taken in Chicago on Carmel’s birthday in 2012. Hannah had met us there and, on one of my rare days off, we all went along to the Chicago Cubs baseball game that night at the historic Wrigley Field. That’s me in the foreground. And I almost caught a ‘homer’, the ball landing just one row in front of me. 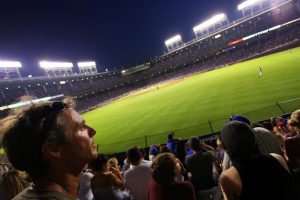 I’m not sure what happened with yesterday’s blog. I had no internet in the room, and had to use a dodgy hotspot up the road. It only uploaded part of my blog. This has now been corrected.

Another productive day, run in warm conditions. It was, however, quite cool early on.

During the morning, I ran past the place where the original rabbit proof fence was started in 1901. From there, it was built south to Esperance and north to Port Hedland, a total of nearly 2,000 km, and taking six years to complete. This made it the longest fence in the world.

I was also passed by two lots of oversized loads, and I really mean oversized! They were trucks with giant mining machinery on board, and required the police travelling ahead to get oncoming traffic off the road. These trucks took up the whole road, so those approaching from the other direction had to stop on the dirt as the trucks passed.

Grace ran the final 5 km with me again. That makes 23 km in total for her so far. We passed a property where two young red kelpies came bounding over to the fence to see us. We patted them for a few minutes, eventually having to leave, despite their continued enthusiasm.

Carmel continues to have problems with Picasa, and is unable to upload any photos at the moment. It’s driving her absolutely crazy, and is wasting so much of her time.

It is also possible that, as we head into more and more remote locations, we may have nights without internet access. If you’re a regular reader, don’t panic if this happens. The blog will be back as soon as internet access returns.