Only one week now until my book is in the stores. And the electronic version should be available on Monday. Once again, if you can’t get to an Australian book store, here’s how you can obtain a copy:

You can place a pre-order right now for a physical copy from Booktopia by clicking on: http://www.booktopia.com.au/the-world-at-my-feet-tom-denniss/prod9781760112097.html

Here is the link to the book on Amazon kindle, which I think will be available from June 22: http://www.amazon.com.au/World-At-Feet-extraordinary-record-breaking-ebook/dp/B00USZXP5E/ref=sr_1_1?ie=UTF8&qid=1434082028&sr=8-1&keywords=tom+denniss

If you have i-tunes you will be able to have a look in the i-book store and place a pre-order which will automatically download on release day. Your credit card doesn’t get charged until the book downloads either, so you haven’t officially paid until release day. I believe you can also go through i-tunes to access the book on the Apple i-books store.

Just for the record, I’d like to clear up what seems to be a misconception with some. It appears that at least a a few people have assumed that the book has been ghost-written by someone else. This is absolutely not the case. Every word has been written by me. While it’s true that many books by ‘athletes’ are actually written by someone else, this is certainly not the case with my book. Just in case anyone might have assumed otherwise.

Today’s photos is from the first night after I reached Los Angeles in late February 2012. It’s of Carmel and a former student of hers, Valeria. Carmel had taught Valeria in kindergarten in 1981 and then again in Year 6 in 1987. Valeria had been living in Los Angeles pretty much since then, having forged a successful acting career which included a speaking part in Sister Act II with Whoopi Goldberg. We had met Valeria and her husband for dinner that night in Hollywood. 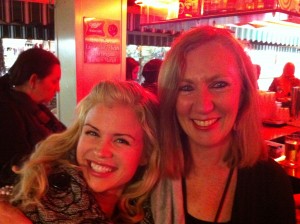 As the height of summer approaches, the heat isn’t the only issue I have to contend with. The humidity is really starting to pick up, and a sticky heat is always more uncomfortable than a dry heat.

But there’s another negative that’s starting to make itself known – BUGS. There are all manner of insects in these heavily forested parts of Minnesota – several types of dragonflies, butterflies, march flies that bite like a tetanus needle, and, of course, the dreaded mosquitoes. I am even being bitten as I run. I’m going to have to invest in some repellent.

I spent the day running on a road just north of the Mississippi River, which I could occasionally see. I also saw a beaver, which ran up a drainpipe when it saw me. And I thought it was only rats that frequented drainpipes.

Half way through the day I ran through the town of Grand Rapids. As I ran into town I spied the largest woodpile I’ve ever seen. It was enormous, and had sprinklers keeping it moist. I did a “back of the envelope” calculation, and I reckon there was between a quarter and a half a million tons of wood stacked neatly in one long pile. Then I saw the reason – a paper mill.

But paper hardly makes Grand Rapids famous. What does, however, is that this town of 10,000 people is the birthplace of Judy Garland. So, you’ve learned something new again!

My “milestone” of the day was that I passed the 6,000 km run in the US. I have several more milestones coming up in the next couple of weeks. Keep watching this space.

Sorry, but I’ve had too many problems with computers and Telstra internet connections these past few hours to write a decent report.

It was a long but quite good day, passing through just two towns. It will get even more sparse in the coming days. More tomorrow (I hope).