With a total of 140 km of running, last week was my biggest since the Big Red Run two years ago. And it was all pretty reasonable quality running, so I was very pleased with the week. There’s only twelve ays now until the Royal Double Ultra, so it’s time to start tapering. I’m looking forward to it – my first race since the BRR.

I continued to make my way through northern Minnesota around this date in 2012. A lot of this running was along beautiful rail trails – former railway lines converted into cycling and running trails. There’s a few photos of me running on these below, as well as a video where I’m running on a dirt track just past the town of Cass Lake.

There are also a couple of others. I distinctly remember the salmon, avocado, alfalfa, and mayonnaise sandwich that Carmel made me for lunch in Cass Lake. We ended up staying that night in a cabin on the lake, where I made a call to our friends, Annie and Michael in Melbourne. Michael, who I was speaking to when the photo below was taken, is now known as Ironbark, after his exploits finding firewood during our time on the Nullarbor more than a year later. As you can see, I was enjoying a late afternoon glass of wine during the call. The shadow of the wine glass on my shirt is an interesting effect. 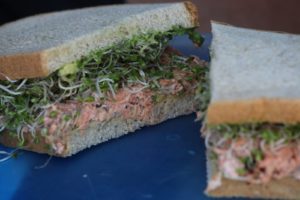 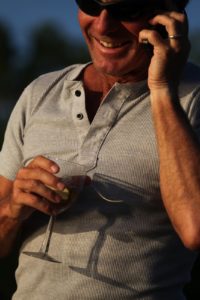 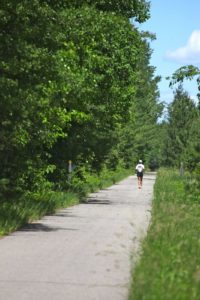