I was a little disappointed in my time trial around Centennial Park today, though I shouldn’t be. I ran the lap in 13:51, which was only five seconds faster than three weeks ago. However, given the good result in last week’s 5 km time trial, I was expecting a time today closer to 13:35. But there appears to be good reason why I wasn’t at my best.

I had an annual medical yesterday, which included a blood test. All manner of tests were performed, amounting to close to ten test tubes of blood being taken – I estimate about 200 mL (yes, that’s the correct abbreviation for millilitres) – and this left me decidedly below bar today. Right from the start I felt nauseous and out of breath. Even now, three hours later, I’m still struggling for breath and feel like I’m suddenly living at 4,000 metres altitude. I wouldn’t have thought that just 200 mL could do that, but it seems to have in this case. But, as I’ve been reminded, blood doping cyclists have an extra half to one litre injected and they perform like they’re Superman. Losing the haemoglobin in 200 mL is clearly going to have the reverse effect to some degree.

Not to worry – I guess I should actually be very pleased that I managed an improved time at all, considering the circumstances. I’ll have to rely on my next lap of the Park as a guide to my prospective City to Surf time. I do believe I’ll need to get it down to around 13:20 to stand any chance of beating my age.

As most readers will be aware, the book comes out on Wednesday. Ahead of that, however, I am scheduled to be interviewed on The Today Show (Australian version) on Monday morning, some time after 7:30 am. The interview will take place in the studio. I’ll confirm that on the weekend.

The world run photo today is of a strawberry patch in California, just south of San Luis Obispo and north of Santa Maria. It was a beautiful day of running. All the farms in that general region seemed to be growing either strawberries or artichokes. I have to admit to having pilfered a sneaky strawberry on that occasion, and it was delicious. 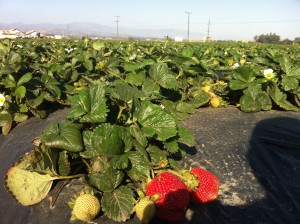