I’ve felt a little tired during my runs over the past couple of days. I guess that’s to be expected, as I’ll have covered at least 240 km during the past two weeks, and have started to incorporate some speed into my runs too. I’ll take it a bit easier tomorrow to freshen up for the week ahead.

I love this photo below. I’m just a head and upper torso running through the corn fields of Illinois during the summer of 2012. There was actually a paved road underneath me, not that you’d know from the photograph. 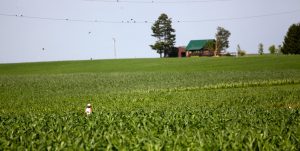