An update on my appearance on The Today Show to talk about the book – it is now scheduled for Wednesday morning, not Monday. At this stage it’s likely to be some time after 7:30 am, but I will confirm a more precise time when I hear from the producers. This means my appearance will be on the same day the book is available in the book stores.

I’ve been taking it a bit more easily since Thursday’s time trial. I had already run 62 km in the three days prior to that, and, coupled with lower haemoglobin from the previous day’s blood test, the hard effort in the time trial left me feeling quite exhausted. A few easier days won’t hurt.

Today’s photo was taken on the Big Sur stretch of Californian coastline. The view is looking almost vertically down at the sea, so you can see how close the road sits to the ocean. One of the great places to run! 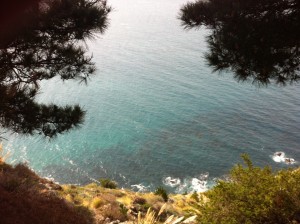