I started the week with a 24 km run this morning. I’ll probably add a few more Ks later this afternoon. Either Wednesday or Thursday I’ll do a run with more speed involved – either some intervals or a short time trial of some sort. So now that my fitness is returning, I need to find an event to focus upon. As I’ve already intimated, the usual races don’t seem to be inspiring me this year. One thing I’m sure of, however, is that a challenge will materialise from somewhere, perhaps from left field. I just have to relax and let it happen.

Today’s photo shows me arriving in La Crosse, Wisconsin, having just crossed the Mississippi from Minnesota. Greeting Carmel (who was taking the photo) and me were Diane and George (pictured). We spent three nights at their place just down the road – a great house with fantastic views over the Mississippi River, coupled with Diane and George’s amazing hospitality. 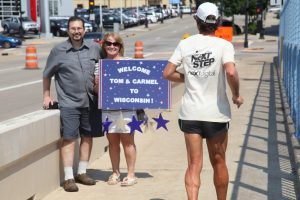 Well, that was a day to remember!!! I managed to arrive in Duluth on the day of their worst floods in over forty years.

Soon after, the rains really started again. I ran through innumerous sections of road that were under water. Well, “waded” is a more correct term. And then I discovered my phone had suffered water damage, and I couldn’t make calls or use most other things on it.

I did manage a milestone today – 5,000 miles. So, to the sound of The Proclaimers, and in a Scottish accent, I would run 5,000 miles, and I would run 11,300 more, just to be the man who ran 16,300 miles to fall down on the steps of the Sydney Opera House. Sorry about the meter and timing and lack of rhyming.  You get the idea though.