If you’re in Australia, don’t forget my appearance on The Today Show on Wednesday morning. It will probably be some time after 7:30 am. I’ll post any information about a more specific time if I receive it beforehand.

The photo from the world run for today gives you a sense of the long lonely roads I encountered much of the time. This one was taken as I ran by the Salton Sea in the southern California desert, not far from the Mexican border. The shoulder which you can clearly see here, was excellent for running, making it a whole lot more enjoyable than it might have been. 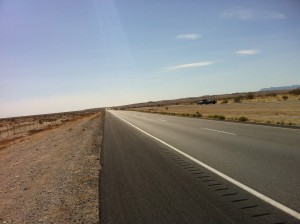