After mentioning my lack of an event to focus on in the last post, I think I’ve come up with an answer. I am strongly considering running a 12 hour time trial some time in August. As some readers will recall, I ran my first 12 hour race last November in Florida, winning the race with 108 km. As great as that race was, the 30 C heat and 96% humidity was never going to be conducive to the maximum distance I might have been capable of under better conditions.

Running a 12 hour time trial in August in Sydney will ensure much more favourable weather conditions, hopefully allowing me to improve upon the 108 km I ran at the Icarus Ultrafest in Florida. How much further I can go will be answered on the day, although I probably won’t be in the same condition as I was last November. Nevertheless, I think I should be capable of more than 108 km, which will be a new personal best for me for the furthest I’ve run in a single day (and in 12 hours, of course).

As I said, I’ll run the event in August, most likely on a Friday in Centennial Park. The park will be less congested on a Friday than on a weekend. I’m favouring the Friday before the City to Surf. I have already identified and measured a 2.6 km loop with no cross roads and an elevation rise per lap of just 12 metres. I would love to have a support person or two (Carmel will be working), so if there’s anyone out there who might be free on a Friday and is interested, let me know. I’ll start at 5 am and finish at 5 pm, but I can certainly get through the first few hours on my own. Therefore, a support person need not arrive too early.

The photo below was taken almost exactly four years ago during the floods in Duluth, Minnesota. Here you can see me running through the worst floods in the region in many decades. As you can see, I was completely soaked through. It wasn’t pleasant, but there the conditions you have to expect on occasions during a world run. 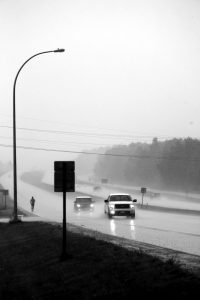 Sorry folks, but at this stage we have no internet here in northern Minnesota. I’m writing this on my phone. Had a good day of 51 km. If no luck with the internet, tomorrow’s blog will encompass two days.

About half way through the day, as I approached where Carmel had pulled over, a car stopped and a guy got out. He’d passed me and realised I was the guy he’d seen on the Today Show. Brendan was from south of Dunedin in NZ, but now works in Kambalda. He had his young daughter, Iris, with him. We talked for a while before heading on.