The book – The World at my Feet –  is now officially in the book stores. And the appearance this morning on The Today Show went well. You can view it by clicking on

There is also an article in the Daily Mail in the UK, which you can view by clicking on

Kevin Carr and I will have a chuckle about the “best mate” claim in the article. We are certainly good friends, though.

The photo for today is similar to one from the past, but this one shows the support vehicle (nearest car on the opposite side of the road) with Carmel standing alongside, waiting for me to run by. This was taken in Arizona after an unexpected dump of snow. I actually enjoyed a great day of running. 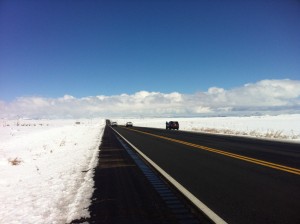