Today marks exactly one year since my book about the world run was published and in the book stores. If you haven’t already read it, you can buy a copy on via http://www.booktopia.com.au/the-world-at-my-feet-tom-denniss/prod9781760112097.html or by Googling the title, The World At My Feet, where you should find it on Amazon.

You can also read my latest article for Azumio. Just click on http://www.azumio.com/blog/fitness/journey-running-what-is-it. This one is of particular interest to those keen on the concept of running around the world.

I’ve had a good response to my intended 12 hour run in August. I will confirm the event in the near future. It will actually be good training for when Serge Girard gets to Australia on his world run a couple of months later. As I’ve said before, I want to do a few days of running with him as he makes his way west from Sydney. That means I’ll have to be averaging around 75 km per day. This 12 hour run will get me fit for this effort.

This photo below has me running through the Garden of the Gods near Colorado Springs. You can’t get bored running in places like this. 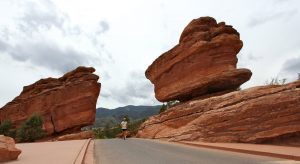 Despite it being hot amd humid, I had a good run today. The countryside was a mix of forests and very green crops, and the roads weren’t too busy and had good shoulders on them.