Wow, what a day!!!! And what an event. The terrain makes this the toughest race I’ve ever attempted, multiplied by a thousand. This course is really, really hard. But the people are great and the race organisation is second to none.

Whether it be giant sand dunes (including the biggest dune in the Simpson Desert – Big Red), gibber plain littered with tennis ball sized rocks, eroded ground with holes everywhere (I trod on one and my foot disappeared almost to the knee), or potholed ground from cattle treading all over it, there was virtually no part of the run that wasn’t really difficult. At times we had to crawl up the sand dunes, so steep were they. Fast times went out the window after the first few kilometres. And the temperature in the direct sun was officially measured as 46.8 C (27 C in the shade). And that’s winter. Outrageous.

As tough as it was, I did manage to place 4th on the stage (there are 55 competitors). Early on I was about 25th, but gradually made my way through the field as many of those who started too quickly began to fade. I finished this first marathon stage in 4:59:05. It’s probably my slowest ever marathon in a race, but I reckon the effort was worth a 3:15. My new friend, Tim, won the stage with a 4:19.

I’m now at the camp, watching the tail of the field come in. Telstra have provided satellite internet here in the middle of nowhere, which is much appreciated. Tomorrow is going to be another tough day, and that’s not even considering how tired and sore we’ll all be. It will be very interesting to see who backs up well. Some might fall apart. I hope I’m not one of them.

Here’s a photo from the top of Big Red. We had to run along the ridge of this massive sand dune for about 1 km, just before the end of the stage. It was definitely soft sand running, as was much of the day. In retrospect, I’m amazed I was able to go under five hours. 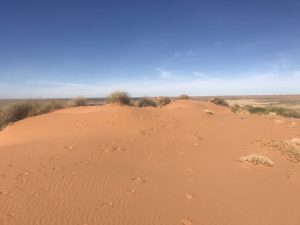