I’ve run 125 km this week. That’s on top of 120 km in each of the past two weeks. I feel like I should be in reasonable form for this 12 hour event in August. At this stage I’m looking at the Friday before the City to Surf, which will be August 12. Kate Day has kindly offered to act as support crew that day. For those who were following during the world run, you may recall Kate ran a total of 87 km with me in various parts of NSW towards the end of that run.

I forgot in the last report to mention some speed work I did on Thursday. I warmed up with 200 metres in a comfortable 35 seconds, then ran 1 mile in 5:33, once again feeling very comfortable. Quite encouraging. I’ll ramp up the speed a little more this week. I won’t be lacking in speed for 100 km come August.

Here’s another photo of the Garden of the God near Colorado Springs. I took this photo as I ran through the park in late April of 2012. It was a truly magical place to run, though I hardly need to say that, based on the photograph. 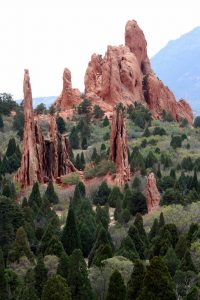