Only a 3:29 kilometre yesterday. I just didn’t have what was required on the day to beat my 3:27 from last week. And it wasn’t helped by a stiff headwind in the back straight. But you can’t run faster every time you go out. Maybe next time?

Today’s videos are from Minneapolis and Norseman – two very different places in the world that I ran through on this date in 2012 and 2013 respectively. The video from Norseman (in Western Australia) was taken at dinner where we met Frankie J. Holden, former lead singer for the band Ol’ 55. He was there doing a documentary on caravanning across Australia. I’ve also added a YouTube video of Frankie performing the band’s biggest hit from the 70s.

The photos include one of me sitting at a rooftop bar in a great hotel in White Bear Lake, just north of Minneapolis, enjoying a wine after a hot 50 km run. I found Minneapolis quite tranquil then – quite different to in recent times. There’s also a photo of me heading off from the home of David and Sherla, who we had met in New Mexico a couple of months earlier. They’d kindly invited us to stay when I reached Minnesota. 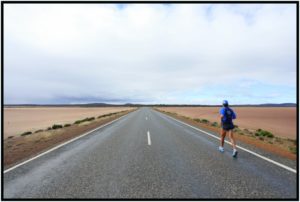