I’ve just finished a hilly fartlek session (and for those who don’t know, fartlek is a Swedish word meaning speed play). That’s my third “fast” session this week, which is pretty much the limit for most people, unless you have a desire to get injured. I’ll end up with about 120 km for the week, and I’m going to take it a bit easier next week. This is my ninth week in a row of 100 km or more, so it’s time for a bit of a rest.

The photo below was taken the day I reached Utah and Monument Valley. It’s not far before the state line on the Arizona side. I love running in the desert. 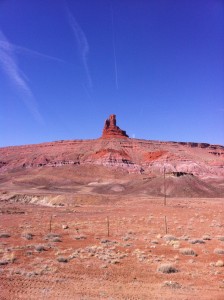 Sorry about yesterday’s missing blog, but that’s par for the course in these parts. We are currently on a 150 km strip of road with no phone reception and no internet, and have been completely out of contact since yesterday morning. I only just found out the State of Origin result, and that we have a new Prime Minister.