Overall, I think today was actually a better effort. I really don’t need to run any faster than that in training for the 12 hour event in August. The good thing is, it felt like my “comfort speed”. To go any faster would require more stress and pain, so I’m glad I don’t need to up the pace any more. I would if I was training for a 5 km, or even the City to Surf, but not for a 12 hour run.

Here’s another photo from the agricultural belt of Illinois. Although there was a lot of “sameness” about the region, it was still a very pleasant area in which to run. 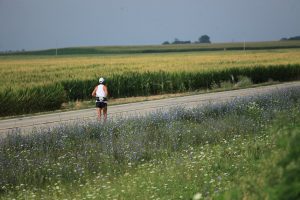 Speaking of Bob Dyan, when I was struggling through the floods in Duluth last week, I forgot to mention that Duluth is where Bob Dylan was born and lived till he was six years old.