I’m glad I decided to have an easier week of training. Yesterday I tried to scramble up a steep embankment and strained a muscle in my thigh, where it attaches to my right knee. I’m sure it will be OK with a few days of gentle running, but I certainly couldn’t have run any sprints today, as I usually do on a Monday. But it’s still my intention to do a time trial later in the week, assuming the muscle strain is feeling better.

I have received word that my book has been spotted on the shelves in a book store, with the full cover displayed, not just the side on view of the spine. That’s good to know, though I haven’t seen the book in a store myself yet. And I’m guessing it will be a while before any feedback is available regarding how sales of the book are going.

I know a lot of people won’t take too kindly to today’s photo from the world run, but this is part of what one sees on such a run. This was painted on the side of a shed in the middle of absolutely nowhere in the Arizona desert. I reckon it’s the evil twin of Crusader Rabbit (a popular cartoon character from the late 60s and early 70s). 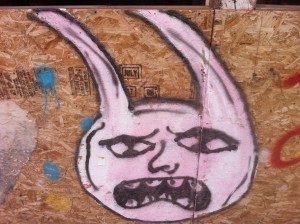 I won’t keep going on about the heat and humidity, but suffice to say that over 1200 “heat records” have already been set in the US this summer alone. Today half the country was over 40 C.

I had lunch in the town of Wabasha, and learned that it was one of the locations for the movie Grumpy Old Men. The Mississippi must freeze in parts during winter, as those guys did a lot of ice fishing (through a hole cut in the ice). Or maybe they fished on one of the many adjacent small lakes.