Not much to report today. I intended to do another time trial or sprint session, but my legs felt atrocious this morning. They were heavy and my muscles even ached as I ran. And that was after a particularly easy weekend of running. It’s weird how resting can seem to make my legs feel worse. Hopefully I’ll be feeling better tomorrow,

The photos for today are from the start of the Nullarbor (2013) and from when I was running alongside the Mississippi River in eastern Minnesota (2012). The first photo is from just west of the Balladonia Roadhouse in WA. We’d met the two girls on bikes (Deb and Danielle, I think their names were) the previous evening at the Fraser Range Station. I was to continue bumping into them all the way across the Nullarbor over the coming weeks.

There’s also a photo of Annie, Michael, Guen and Jeff, who met us at Balladonia on this date in 2013. Jeff and Michael were to accompany us across to Port Augusta, while Guen and Annie returned our borrowed car to its owner, Julie, in Perth. The third photo is from where I finished running that day, at the start of the second longest stretch of road in the world.

The final photo is from the town of Wabasha, which is the supposed setting for the movie Grumpy Old Men. However, I’m led to believe that much of the movie was actually filmed on the ice further west at Detroit Lake, which I had run through two weeks earlier. 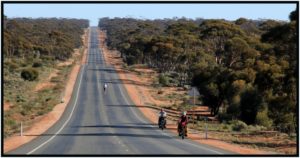 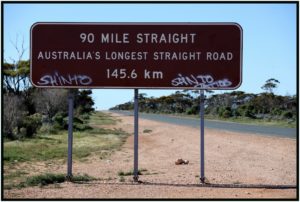 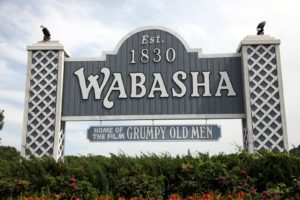