I’ve done a bit of analysis based on my time trials in past years and how they correlate with my City to Surf time.  Below is a graph that illustrates this correlation. The red line is my City to Surf time, and you need to refer to the left hand axis to gauge the actual times for each year. The Centennial Park and 3 km time trials  (always the same course) are in blue and green respectively with the right hand axis relevant to these. The years 2011, 2012 and 2013 have no data (I was either training for or running around the world then), however the graphics program simply interpolates the lines between 2010 and 2014.

You can see how all three graphs correlate quite well (I’ve had to take a photo of the graph and insert it in the blog, as I don’t know how to add a spreadsheet graph any other way). The one anomaly is 2009, where the red line (C2S) goes down when the others go up. This was the year when I’d been cycling in Europe (Alps, Pyrenees, and Mont Ventoux) until just before the City to Surf. My shorter times were not that great that year, but my C2S was quite good – I guess I was attuned to long solid efforts but not so much to pure speed. 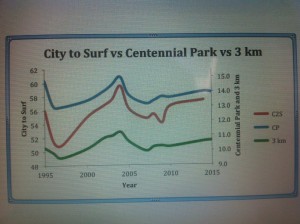 It was a very hot one again today; 32 C, but I am pleased with how I’m handling it. The roads were generally very quiet again, at least during the first half. At 20 km I reached a very nice lake that I ran along the shore of for about 4 km. It reminded me a lot of rural Sweden, north of Uppsala, including the red barns. Carmel very patiently provided me with drinks at appropriate spots along the road for three hours this morning, culminating in a nice late morning snack by the lake.

The tracker is showing me in Redfield, but my official position is about 10 km to the east.