I think I’m on the right track with my gluteus issue. I’m able to get through short runs without any ache, although it still starts to fatigue after about 5 km. It doesn’t stop me from running further, but I can feel it producing weakness in my right leg. I have another physio appointment today. I’m hopeful it will be completely solved by the time the Big Red Run commences – which is only two and a half weeks away now.

On that matter, I’ve not had a good response to my mandatory fund raising for the event. I have to get to $1000 or I won’t be allowed to start. I’d really appreciate any donations readers are able to make. It goes directly to juvenile diabetes research and is 100% tax deductible. That means you’ll be able to claim at the end of this month. Please help if you can by clicking on https://bigredrun2017.everydayhero.com/au/tom-s-next-step.

Below is another photo from Germany during my world run. It was conditions like this that I found the most dangerous. As you can see here, there was no shoulder on the road and cars had to go wide around me. There was usually a cycle path nearby, but that didn’t do me much good when I couldn’t find them under a foot of snow. 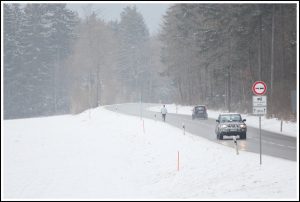 I ran out of the town of Clark and past a couple of ‘Historic Site’ plaques (I really enjoy seeing these short explanations of the local history. They are starting to pop up in Australia now too). I learned the story of a little boy who lived on a farm near the train line just outside of Clark in 1888. Every day he used to wave to the engineer as the train passed. The engineer didn’t know his name, and simply referred to him as the ‘Little Fellow’.

At about the same time, a local from the town (current population of about 1200) became a laywer. He went from strength to strength, eventually becoming Governor of South Dakota – one of Clark’s favourite sons.

I later ran through a very nice town called Henry. As always, when I pass through a town with a person’s name, I like to dedicate the occasion to a friend with that name. So, just as Watsonville was decicated to my old mate Watson from Wagga Wagga, Carmel to Carmel, and Blunt to Roger Sharp, I dedicated my passage through Henry today to Henry Jennings. There will be plenty more dedications to come, so keep watching this space. You never know when I might pass through a town with your name.