I managed a run of 21 km this morning, and didn’t feel the calf at all. The only issue was my legs started to fatigue a little due to a lack of solid mileage in recent weeks. But the progress is very positive and I should be back to normal by next week.

Many readers may think they’ve previously seen the photo below. But you haven’t. It looks very similar to one I’ve posted in the past, but this one sees me further up the pass on the Chilean side of the Andes. I was still less than half way up this series of hairpins at this point. As difficult as it appears, it really wasn’t that hard. However, it certainly was a magical running experience. 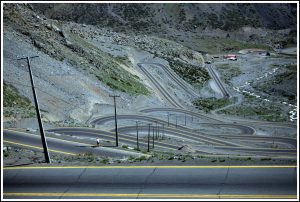