This has been a long weekend in much of Australia and Carmel and I have spent it down the coast. Once again, that has afforded me the chance to run in a different environment to that of my usual daily training runs. Today my Monday speed work session was done in a different format – fartlek. For those who aren’t aware, fartlek is a Swedish word meaning ‘speed play’. I simply ran fast for a bit, then rested with a slower section, before throwing in another fast section. And so on.

I mixed up the pace of the fast parts, sometimes doing short bits (maybe 200 metres) at top pace, while other times running a little less fast for longer stretches (approximately 1 km). The point is not to make it too structured – just to have fun with a bit of speed. Next week I’ll be back to intervals, but will be more mentally fresh for it, having this week enjoyed a different format in a different location.

Today’s photo from the world run is of a ten lane freeway in Los Angeles. I took the photo as I ran on an overpass above the freeway. I was never able to run on freeways in California – it’s illegal – but Carmel had to drive on them occasionally, which can be a nervous experience in itself. 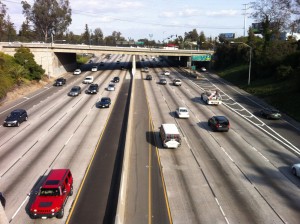