I’ve run 60 km in the first three days of this week. I reckon that counts as being ‘back to normal’, at least as far as my running goes. Some people wouldn’t call that normal though.

I’ve been mixing my shoes up lately too. Some days I wear thicker soled shoes, while other days (like today) I wore much thinner soled shoes. My preference is for the thin soles, although I’ve had to include the thick soles (actually it’s the heel part that’s predominantly thicker) as these relieved the stress on my calf when it was sore. It’s the same when you have an Achilles injury.

But I can now gravitate away from these ‘high heeled’ running shoes. Unfortunately, the idiots at the shoe company who make the shoes I’ve been wearing have decided to discontinue the flat heels that I found so great for running around the world. Having used these shoes for the past six years, I’m now going to have to find a different shoe company that makes running shoes with thin, flat, minimalist soles.

Here’s a photo of me running in the shoes I prefer. I have no idea where this was taken, but if I had to guess, I’d say the Californian desert, or perhaps in Arizona. Then again, it could have been in Argentina. 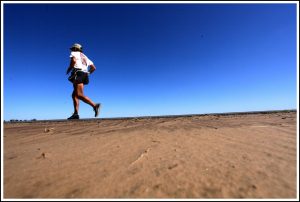 There are also others who deserve a mention, such as Rosie Swale-Pope, who ran around the northern hemisphere (Eurasia and North America) several years ago.